Feast of the 7 Fishes 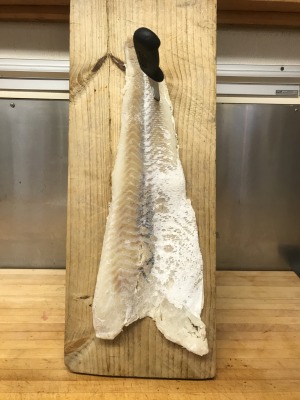 The Feast of the Seven Fishes is part of the Italian-American Christmas Eve Celebration. It is a feast that typically consists of seven different seafood dishes. It originates, however, from Southern Italy, where it is known as The Vigil (La Vigilia). Some Italian-American families have been known to celebrate with nine, eleven or theirteen different seafood dishes. This celebration commemorates the wait, the Vigilia di Natale, for the midnight birth of the baby Jesus. The long tradition of eating seafood on Christmas Eve dates from the Roman Catholic tradition of abstience from meat and dairy products on the eve of certian holidays, including Christmas. The number seven is rooted back in ancient times and it can be conected to mulitple Catholic symbols: in fact, the seven seems repeated more than 700 times in the Bible. Also, according to the Roman Catholic Church there are seven sacraments, seven days of the Creation as well as seven deadly sins. Hence, the seven courses! The meal may include seven, eight, or even nine specific fishes that are considered traditional. The most famous dish Southern Italians are known for is baccala (salted cod fish). The custom of celebrating with simple fish such as baccala is attributed to the greatly impoverished regions of Southern Italy. Fried smelts, calamari and other types of seafood have been incorporated into the Christmas Eve dinner over the years. The meal’s components may include some combination of anchovies, whiting, lobster, sardines, dried salt cod, smelts, eels, squid, octopus, shrimp, mussels and clams. the menu may also include pastas, vegetables, baked or fried kale patties, baked goods and homemade wine. this tradition remains very popular to this day.